This article from Beatrice Kennedy was originally published on Next Billion in May 2022. Beatrice is an analyst at Powertrust

The Transformative Potential of D-RECs in Emerging Markets

Governments, nonprofits, international development organisations, and small and medium-sized enterprises all have key roles to play in addressing the climate crisis, as do individual consumers. But if the world hopes to find a workable solution to climate change, large corporations must transition away from fossil fuels for their power needs.

In developed markets, procuring renewable energy is a large part of corporations’ climate strategies, which aim to reduce their carbon footprints – often to fulfil specific climate change-related commitments. Corporations bought a record 31.1 gigawatts of clean energy through power purchase agreements in 2021, up nearly 24% from the previous year’s record of 25.1 gigawatts, according to BloombergNEF. These corporate procurements typically involve entering into large-scale power purchase agreements, or purchasing renewable energy certificates (RECs) from wind farms or utility companies.

A REC is a market instrument that certifies one megawatt-hour of electricity was generated from a renewable resource. When RECs are purchased, they give their owners the legal right to claim renewable energy use from a specific source – without needing to track the actual electricity that flows through the power grid. This makes it fairly straightforward and easy for large corporations to invest in renewable energy in developed markets – all the tools and systems are already in place.

But while this progress in developed markets is important, emerging markets are being sidelined. Not nearly enough investment is being driven into clean, reliable energy systems in these countries, which also tend to have the most carbon-intensive grids. And since these countries also generally lack the regulatory framework to enable their renewable energy providers to sell RECs to global corporations, they’re unable to access this source of funding to expand their clean energy production. This is a missed opportunity, because building more renewable energy systems in developing economies would have a much more significant carbon impact than deploying these systems in Europe or North America.

What if we harnessed the growing innovation around the digitisation of energy systems to connect global corporations with climate commitments to energy developers in emerging markets, to help drive the financing these developers need to deploy more renewable energy?

The D-REC Initiative is trying to do exactly that. Co-led by Positive Capital Partners and South Pole along with a range of stakeholders, the initiative is building a platform that is creating a global marketplace for distributed renewable energy. The D-REC Initiative’s mission is to accelerate climate justice and the energy transition by reducing the barriers to entry that prevent high-impact distributed renewable energy projects in emerging countries from participating in global environmental markets. 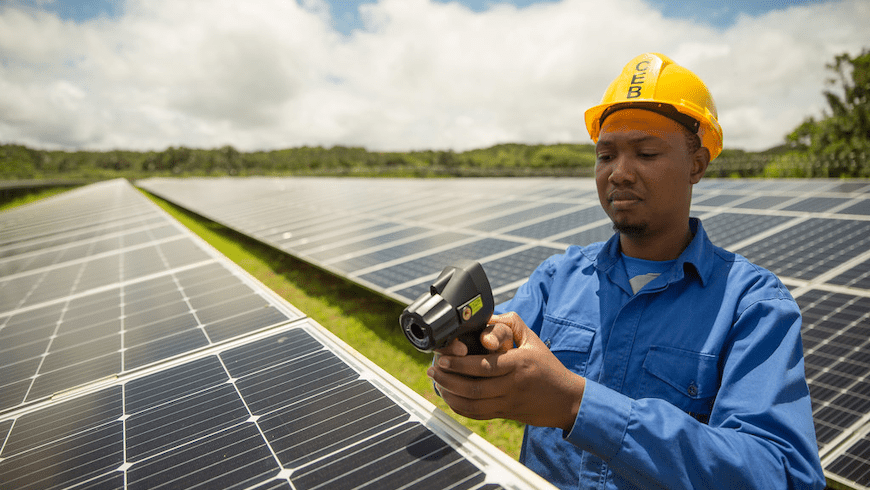 The focus on distributed renewable energy is key. Distributed renewable energy systems – in which electricity is generated from sources that are at or near the point of use, instead of centralised sources like power plants – are well-suited to the rural communities of the world. They are much faster to deploy and less capital-intensive, and they do not require a lot of supporting infrastructure like transmission lines. As a result, these off-grid systems are very attractive in markets with an energy access deficit.

To support the development of these systems, the D-REC Initiative is building a digital platform for Distributed Renewable Energy Certificates (D-RECs), with each certificate representing one kilowatt-hour (kWh) of electricity that has been generated from a distributed renewable energy source (or multiple sources). These certificates allow renewable energy project developers to certify every kWh of electricity their projects generate.

The platform uses open source technology to first measure and verify the electricity produced from the underlying projects, then issue and certify D-RECs to capture the positive environmental attributes associated with that generation. Renewable energy providers can then monetize these D-RECs by selling them to corporations that incorporate them into their sustainability reporting. The D-RECs are valuable to corporations because they certify that the electricity these businesses procured is renewable, thereby minimising their carbon footprint and helping them fulfil their climate pledges. They are valuable to renewable energy projects because they provide an additional source of revenue: These projects can sell their energy directly to local customers in emerging markets, while also selling D-RECs that quantify and verify that energy to a secondary market of corporate customers around the world. And since D-RECs are highly focused on enabling corporations to achieve the highest climate impact per dollar invested, their value can be affected by their carbon impact. Not all renewable energy is the same, and the climate impact of any renewable energy deployment depends on what type of energy it is displacing. So for example, a renewable energy project in Southern Africa, where most grids are coal-fired, is going to have double or triple the carbon impact of a similar project in the U.S. or Europe, which can affect the value and pricing of that project’s D-RECs.

Accelerating the energy transition is going to require the full participation of an extensive array of stakeholders, which is why the D-REC Initiative’s platform is open source and community-owned. The initiative has been fortunate to receive funding and support from EnAccess, a foundation that champions open source solutions for energy access and has helped fund several other innovative open source solutions in the energy space.

An open source platform provides transparency and invites participation from a wider group of stakeholders, by allowing entities from all sectors to view and propose edits to the code in a capacity that accommodates their needs. For example, if an energy project developer only uses small wind turbines, the D-REC code may not currently support this kind of technology. However, the developer would be able to join as a collaborator for the code repository, and then commit changes to the code to support its technology and monetise its renewable energy generation. As a result, it would not only gain access to D-RECs for its project, it would also be providing code that could enable future developers of similar small wind turbine projects to gain access of their own. But it is important to clarify that not everyone can simply go in and edit the code. First, an energy project developer who wishes to propose a change must be invited by the D-REC Organisation, which owns the code repository, to submit changes. Once those changes have been approved and committed, the new code will then be rolled into a test environment, validated and then published, after which the changes will really take effect. This ultimately will allow developers – like the hypothetical small wind turbine project mentioned above – to begin issuing D-RECs for their energy projects. Due to these measures, the ability to edit the code is not just a free-for-all, but rather a moderated and systematic process, ensuring that all changes to the code work.

This process preserves the key advantage of open source technology – namely, the ability to adapt, which is critical in an industry which is constantly evolving and growing. It also allows for large-scale collaboration from leading global corporations, international standards organisations, technology providers, international development organisations, environmental market agents, sustainability advisors, renewable energy industry associations and project developers in emerging markets. And importantly, the D-REC platform champions transparency through its open source nature, an element which is very important in a world that is trying to create genuine and transparent changes within industries working towards net zero carbon emissions. D-RECs offer this transparency through the public accessibility of the code that generates the D-REC certificates. The certificates that are issued are recorded on a publicly-accessible distributed ledger (i.e., a blockchain), thereby making the issuance and transfer of D-RECs visible. The platform allows anyone to query to see if a project has already sold a D-REC for a particular time period – which will prevent double counting of the energy certificates these projects are generating.

As the initiative grows and gains traction, increased demand and global participation will enable D-RECs to have a larger impact on the energy transition, by allowing for a wide range of renewable energy deployment. Through these approaches, D-RECs can create a global market for distributed renewable energy: Each D-REC can be traded, bought and sold – with each issuance and change in ownership tracked on a public blockchain. This visibility, combined with the underlying code being open-source, will ensure that all stakeholders continue to have confidence in the D-REC’s data integrity.

Thanks to these benefits, D-RECs have considerable potential to accelerate the renewable energy transition, by harnessing the momentum of corporate-led climate action to finance clean energy projects in the parts of the world that need it most. This collaborative approach to energy access is enabling a market environment that can mobilise corporations’ vast resources to generate ongoing investment into renewable energy deployment in emerging economies.

Back to all Articles
Go to D-REC Initiative